Cold tolerance in palms (Jubaea vs Phoenix): A method to quantify cellular foliage damage in palms caused by freezing temperatures gives hints into a decades long discussion what the hardiest pinnate (feathered) leaved palm species is. 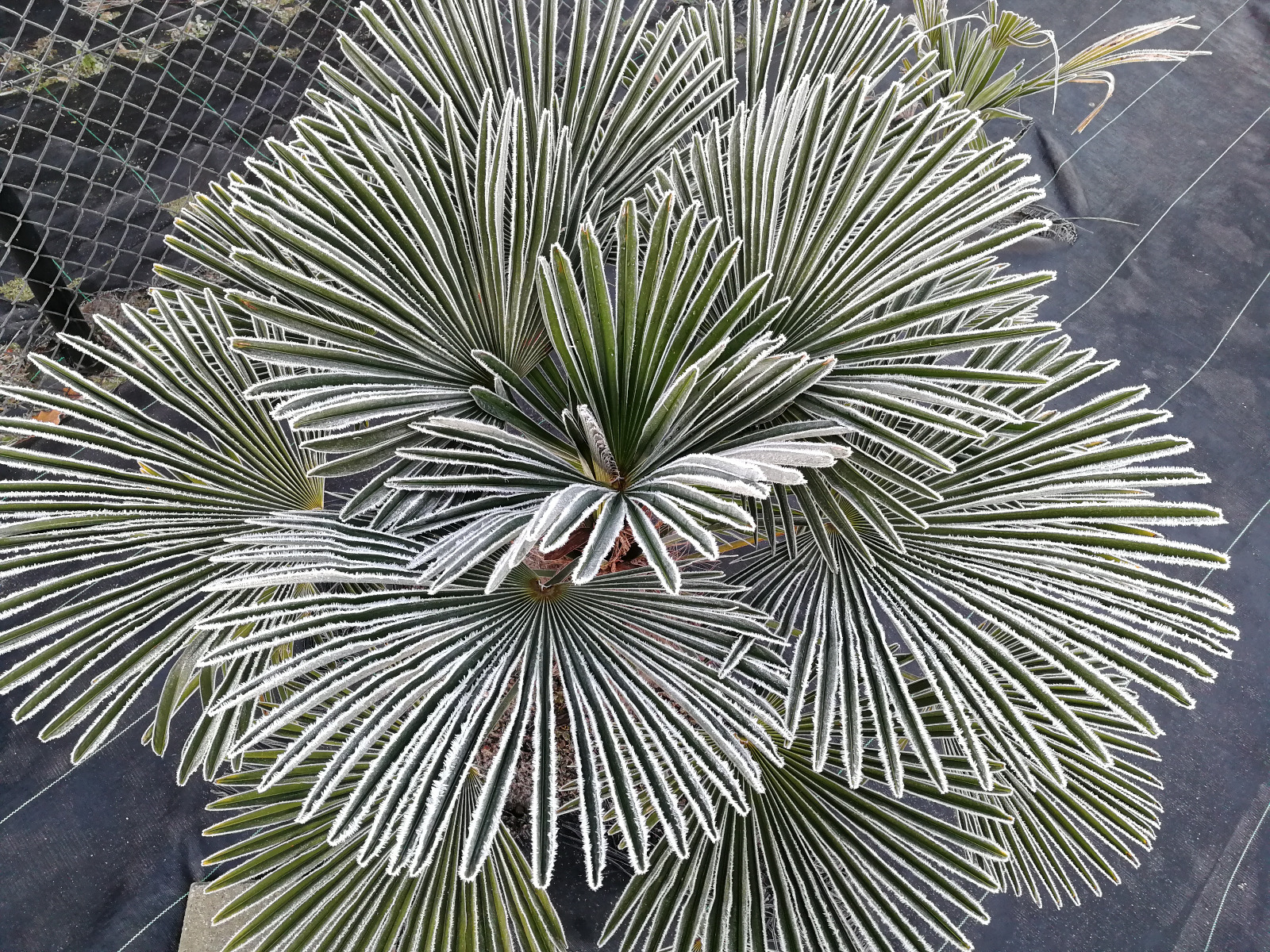 Introduction
Palm trees exist on all continents except for Antarctica. The vast majority of palms originates from tropical regions however some grow in regions that receive frost in their natural habitats. These palm species acquired specific traits to cope with the frosty conditions. There are at least three types of habitats where cold tolerant palm species originate from. High altitude locations, inland (often desert) or locations that are far north (or south) from the equator are habitat types where cold tolerant palms originate from. A good example of high altitude acquired cold tolerance are certain members of the Ceroxylon genus which grow up to altitudes above 3000 meters while being close to the equator and in rainforest conditions. Varieties of Sabal minor show higher cold tolerance as the habitat is found further inland. The northern- and southern most palm Chamearops humilis (northernmost location Cape Taillat, France) and Rhopalostylis sapida (southernmost location Chatham islands) grow far from the equator and acquired a good amount of cold tolerance. Some species grow in a habitat type that combine elements of the above mentioned habitats. For example Trachycarpus fortunei originates from high altitude locations that are located inland at quite a distance from the equator. This makes Trachycarpus fortunei one of the most cold tolerant palms.

What is cold tolerance and what happens when a palm is exposed to frost?

In this article, when we speak of cold tolerance we mean the ability of the palm to survive low temperatures (frost). Cold tolerance and winter hardiness are two different things. Cold tolerance can be seen as one single element of winter hardiness. To determine the degree of cold tolerance of a palm there are many climatic aspects to take into account that can have an influence on the palms survival. Examples are I.A. the minimum low and daytime high temperatures, the duration of the low temperatures, relative humidity, precipitation and wind/air movement. Additionally, internal processes can be influenced by the acclimatization period prior to the frost. The general health and the age of an individual can also determine how well the palm is capable to initiate internal mechanism to defend themselves to frost.

One way severe frosts can damage the cells of palms is by ice formation in the cells. When water inside the cells or in plant tissues crystalize it can penetrate membranes and call walls. A second way frost can damage palms is when they are exposed for a long duration of freezing temperatures. When this occurs the palm needs to be in a dehydrated state for a long while to ensure water does not crystalize. Palms dehydrate themselves so that sugar concentrations are raised, acting as an antifreeze. When palms are dehydrated too long the meristem cells in the growth point are vulnerable for damage. When this happens during winter, fungi and bacteria will start infecting the damaged meristem cells which will cause a phenomenon called bud rot.

When hardy palms are exposed to colder conditions (and in some species lower light conditions) they will initiate their internal defence systems. Currently the internal mechanisms that palms use to protect themselves from frost are poorly understood. A few of these mechanisms can however easily be observed with the naked eye (Figure 2 and 3). When palms are dehydrated because of long exposure to frost it will try to decrease additional water loss. It will close the guard cells of the stomata and fold the leaflets towards each other to reduce the surface area, thus reducing transpiration. The leaflets usually reopen as soon as temperatures rise and the palms can rehydrate. Another phenomenon that many palm enthusiasts will probably recognize is the discolouration of the leaves which is visible directly after severe frost. The colour patterns differ per palm species but the process seems to be similar. It is likely that the palm is pushing water from the cells vacuole into the intercellular spaces. This dehydrates the cells causing the concentration of sugars in the vacuole to increase. The increased sugar content of the cells increases the freezing point preventing ice crystallization in the cells. Ice formation in the intercellular spaces occurs but this causes much less damage. As soon as temperatures rise again the cells will rehydrate themselves and the colours will disappear within hours. 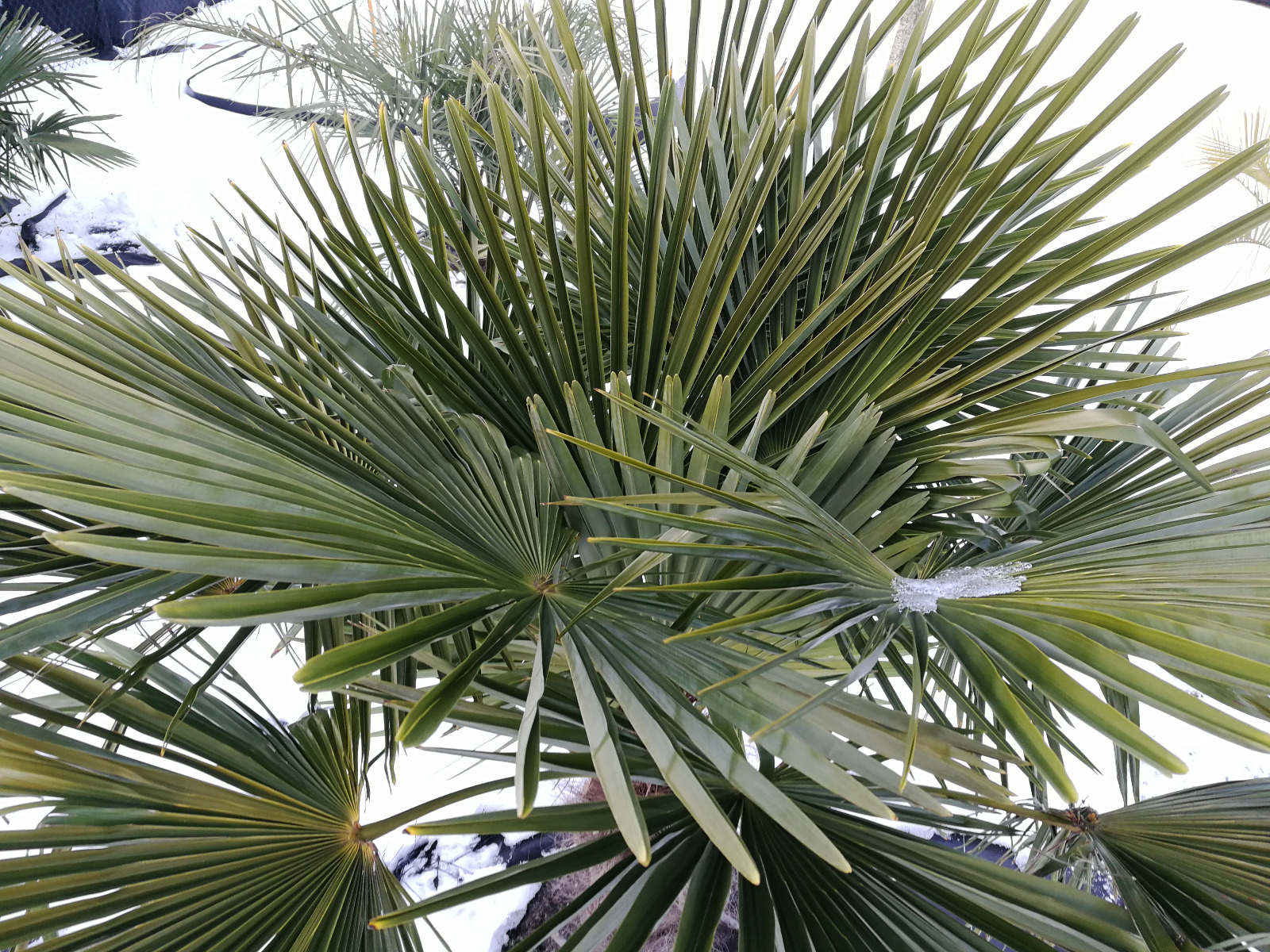 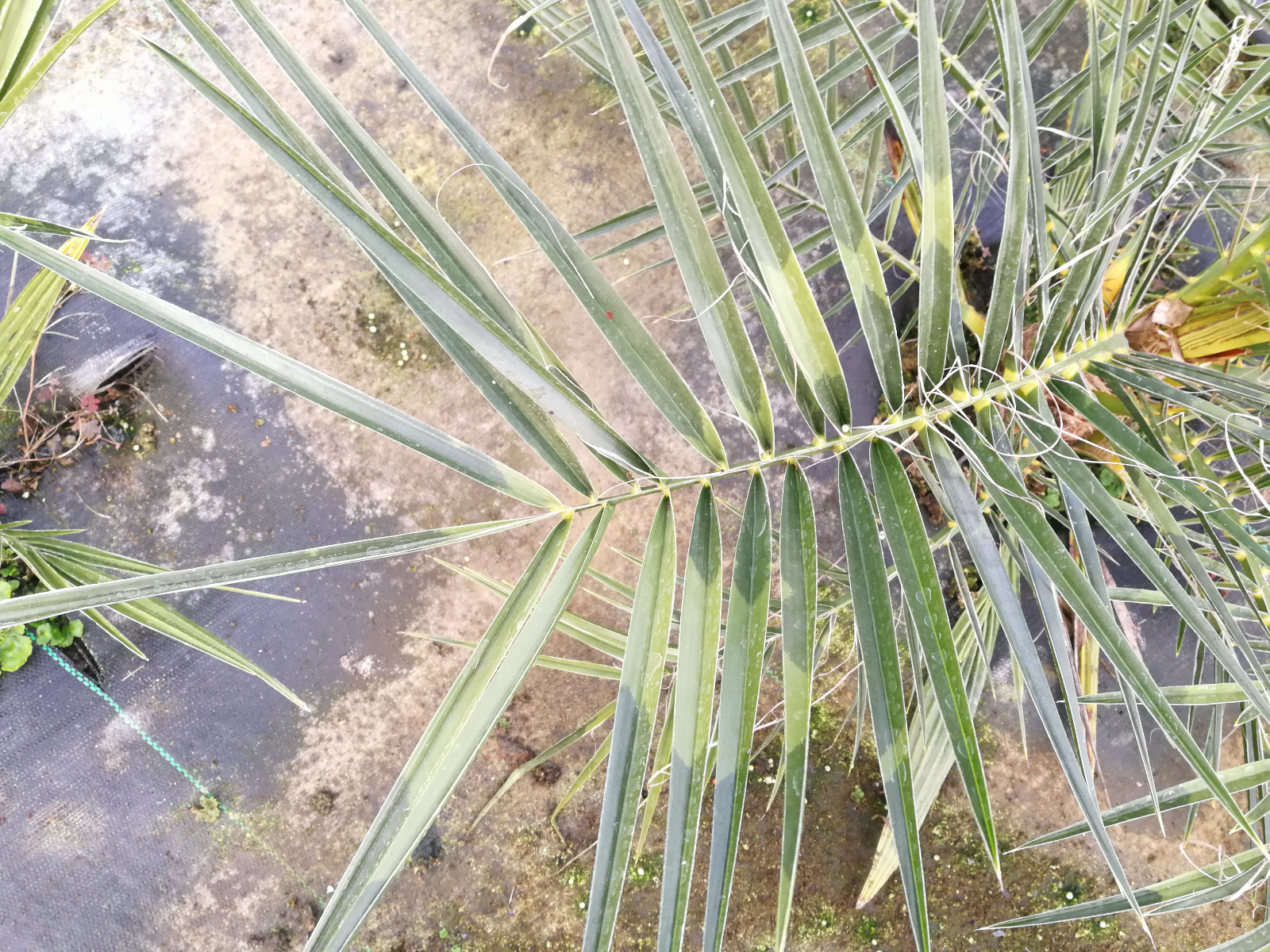 Genetic influences
Taking into account the above mentioned variety of climatic aspects, different types of damage and internal mechanisms one can conclude that frost tolerance is very complex. Adding to the complexity is the fact that every individual palm has different genetics and cold tolerance may differ between individuals palms of the same species. Relatively large genetic differences are likely to be present depending of the natural habitat of the palm. To give an example; Chamearops humilis from Cap Taillat in France seem much more cold tolerant than individuals that originate from Sicily.

A method to quantify cellular foliage damage in palms caused by freezing temperatures
Cellular foliage damage in palms can be quantified using electrolyte leakage or also called ion leakage tests. These tests are non-destructive and can give information about the cold tolerance of plant tissues. We have developed a protocol for ion leakage tests that proved reliable for essentially all hardy palm species. In these tests a predetermined surface area of leaf tissue is exposed to multiple temperatures for a certain duration in a freezer. After returning to room temperature the leaf samples are placed in demineralized water. The sample is left for a certain amount of time so that there is time for the cellular content of damaged cells to dissolve in the water. The electronic conductivity of the water is then measured in micro Siemens. Then the samples are autoclaved which destroys all cells and are measured again. The percentage of cellular damage can now be calculated for each tested temperature. The advantage of these tests compared to field trails outside are obvious. Field trails test the winter hardiness and not necessarily the cold tolerance of a species. Ion leakage tests are non-destructive, produce results within a few days and they work independent of outside influences.

Using ion leakage tests we tried to find out how the cold tolerance of different members of the Phoenix genus compared to Jubaea chilensis and we added Trachycarpus fortunei as a baseline reference. The tests were conducted in December to allow for a good acclimatization period prior of the test. All tested plants were of similar age (two year old pot grown seedlings). The results of the trail are shown in figure 4.

The results from this ion leakage test suggests that Trachycarpus fortunei is by far the most cold tolerant species. This corresponds with the expectations as this species has proved itself to be very cold tolerant in field conditions. In this test it started getting serious damage above -12°C and -15°C proved fatal. Note that the duration of the temperature treatments (24 hours) is a much longer exposure time than this species will ever receive in the field. To give an example; in the 2012/2013 winter the central part of The Netherlands experienced an extreme low of -22,9°C but during the daytime the temperature increased to -9°C making it the coldest day in recent history for the country. Both Jubaea chilensis and P. theophrasti var. Epidaurus show very similar results with the former showing slightly more damage at light frost (-6°C). P. loureiroi var. humilis (Kashmir) and P. theophrasti Golkoy shows a slightly better cold tolerance as P. canariensis and P. theophrasti (origin Crete). P. dactylifera Medjool is the least cold tolerant according to this test.

The results of this trial corresponds with expectations from experience and field trails. The results show a snapshot in time of the cold tolerance of the tested species. The specific minimum temperatures values should not be taken literally as the damage at certain temperatures may vary. For example if the same test would be conducted during summer when the test plants are not acclimatized to cold conditions they will likely get damaged much more easily and they will probably handle more frost if the acclimatization period was colder. Therefore this test does not show the absolute minimum a species can survive. However it does show how species compare to each other. Both Phoenix canariensis and Trachycarpus fortunei have been tested outside thoroughly which makes for perfect reference material.

Based on the results of this test the conclusion can be drawn that Jubaea chilensis has a better cold tolerance than P. canariensis, P. dactylifera Medjool, P. theophrasti (Crete origin), P. theophrasti var. Golkoy and P. loureiroi var humilis (Kashmir). However P. theophrasti var. Epidaurus seems to have a similar cold tolerance compared to Jubaea chilensis and even performing slightly better at coping with light frost. Considering the vigorous growth advantage of Phoenix species and therefor better recovery speed Phoenix is arguably the better species for many temperate climates. However, personally I would just plant both species in my garden.